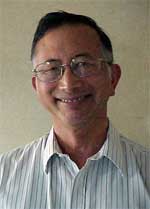 Dennis Mar received his undergraduate degree in mathematics from the University of California-Berkeley, and his masters in statistics from Iowa State University, where Atanashoff and Berry built the first electronic digital computer in 1937-42. Dennis’ first substantial computer program was written in Fortran II, punched on cards, and run on an IBM 1620 with a core memory clock time of 10 microseconds.

Dennis began his higher education computing career in 1980 at the Naval Postgraduate School (NPS). It was still a time when computing was so new that the user services staff came from many fields: libraries, mathematics, and fine arts. Dennis only took one class in operating systems and learned everything else on the job-you can see where SIGUCCS fits in!

At that time, computing was done through a mainframe batch processor. That system did have the nice feature of providing a few minutes to chat with people while waiting for the submitted programs to return the results. It was a wonderfully accidental way to interact with students and faculty.

Dennis eventually became manager of academic user services, but fled the information technology group in 1999 “from an overdose of Y2K.” Since then, he has worked as a database specialist at NPS on faculty research programs.

Dennis attended his first SIGUCCS meeting in Reno (1984) and had a perfect attendance record through Denver (1999). Early on, he met Penny Crane and absorbed her philosophy of people-oriented technology with plenty of fun. Over the years he found the SIGUCCS environment comfortable (dancing in public and riding water slides), enlightening (going to all of Jerry Martin’s talks and copying whatever he could from Virginia Tech), and even fortuitous (meeting his future wife, Susan, at the San Diego conference).

“SIGUCCS is an incredible resource benefiting both its attendees and the communities they serve,” Dennis says. “The most memorable endorsement of SIGUCCS I’ve seen came from two women at an Egyptian university. After attending once, they came again. For someone to find so much value in the conference to come all that way, what better endorsement could there be than that?”