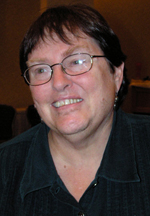 To recognize her significant service to higher education, the computing profession, and to ACM SIGUCCS.

Jennifer Fajman has compiled an extraordinary record of service to SIGUCCS. After receiving a Masters Degree in mathematics from the University of North Carolina at Chapel Hill in 1967, Jennifer went to work for the National Institutes of Health in Bethesda, Maryland. In 1983, she accepted a position at the University of Maryland at College Park as Assistant Director for User Services and moved up to positions of increasing responsibility, becoming Executive Director of Academic and Distributed Services. She retired from that position in 2001. In 1997, Jennifer was recognized for her leadership at the University by receiving the President’s Distinguished Service Award.

Jennifer first joined ACM in 1968; she later joined SIGUCCS in 1987. In 1989, she chaired the Fall User Services Conference that was held in Bethesda, Maryland. From 1990 until 1996, Jennifer was Director of Tutorials. In 1991, she began a long period of service on the SIGUCCS Board, first as a Board Member, then as Chair of SIGUCCS from 1999 to 2002. Jennifer completed a remarkable sixteen-year record of continuous SIGUCCS service when she finished her term as Past Chair of the Board in 2005.

In addition to her work with SIGUCCS, Jennifer was simultaneously very involved with our sister organization, Educause, where she served on many committees and actively participated in their conferences. In 1988, Jennifer coordinated the Educause meeting in Washington DC. In 2001, she served as the chair of the Educause’s Recognition Committee, after being a member of the committee since 1994.

Upon being selected for the SIGUCCS Hall of Fame award, Jennifer indicated that she made “super” professional contacts through her work with SIGUCCS, many whom she considers today her dear friends. Jennifer’s involvement with SIGUCCS reemphasized her principle that people are what make things work-and partnering within the university and outside of the university are important aspects of providing successful information technology services.

“Working with people from a variety of universities, in different positions, who all had the goal of providing excellent IT services in an educational environment, helped me focus on the right issues and the right technologies with the right people.” Working with a group of volunteers prepared her for volunteer work upon retirement. Jennifer hopes that others will volunteer to work with SIGUCCS and benefit from the professional development that these opportunities provide.