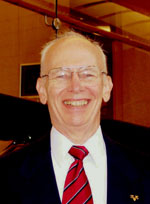 J. Michael “Mike” Yohe is currently Executive Director of Electronic Information Services at Valparaiso University, a position he has held since 1996. Prior to that, he served in similar positions at the University of Northern Iowa and Bradley University, and as Director of Academic Computing at the University of Wisconsin – Eau Claire. In his current position, he is responsible for strategic planning and oversight of computing, data networking, the telephone system, video services, and instructional media for the University.

Yohe began his computing career in 1957, when he was in the U. S. Air Force stationed at the Pentagon. During graduate school, he worked for the Mathematics Research Center at the University of Wisconsin – Madison, where he began by writing computer programs for research mathematicians and eventually managed the computing operation for several years. He began his career in college and university computing management in 1978.

Yohe holds a Ph.D. in theoretical mathematics from the University of Wisconsin – Madison, and a Bachelor’s degree from DePauw University.

Throughout the years, Yohe has been very involved with SIGUCCS. Most recently, he served as conference chair for the Spring 2003 Computer Services Management Symposium (CSMS). He was program chair for the same conference in 1989, 1996, and 2002. He wore his presenter hat for the Fall User Services Conferences in 1994, 1995, and 2000.