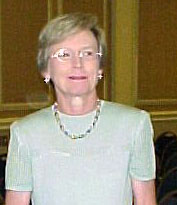 Jane Caviness has had a productive and successful career in higher education and computing. She has held positions of increasing responsibility in computing services at the University of Wisconsin-Madison, at Rensselaer Polytechnic Institute, and the University of Delaware. She moved to the National Science Foundation (NSF) where she advanced to Deputy Division Director for Networking and Communications Research and Infrastructure. Her leadership promoted the introduction of the Internet to higher education.

Jane has been active in many professional organizations of computing and higher education. She presented nationally and internationally on issues ranging from computing services, computing management, networking support, and national networking. She was a representative to EDUCOM, served on various committees, and was a member of its Board of Trustees from 1986-1988.

Jane has been an active member of ACM/SIGUCCS serving as Vice Chair from 1982-1985, and then as Chair from 1985-1987. She has presented at the SIGUCCS User Services Conferences and the Computer Services Management Symposia, served on SIGUCCS committees, and continually supports the organization’s efforts. She has also been instrumental in mentoring staff who worked for her, strongly encouraging their participation in SIGUCCS conferences and volunteer activities.